On the subject of Suicide

Last night all those using South West Trains were delayed. There were various signalling problems late on in the day, but the majority of the carnage was due to somebody committing suicide at Wimbledon.

I’ll moan about delays and endlessly promote the need for better service, but what I don’t understand is some of the vitriolic bile being spewed out by some on Twitter last night. Yes, the disorganisation is an issue and yes, the communication of the Twitter team should be matched by the staff on the platforms, or as someone rightly said: “We all understand & sympathise re disruptions/delays, all we ask is accurate info.”

I’m not going to name and shame, for it really isn’t my place, but did you happen to see some of the tweets last night? Oh. My. God. Sometimes I hate Twitter. It makes you acutely aware that people exist who have a completely different opinion to life and the universe. What on earth is the point of telling the South West Trains twitter team that they are (in no particular order): “W*nkers”, “c*nts”, “get up off your ar$e” “shower of useless sh*te” (to name but a few).

In all the melee, it seems to have been forgotten that someone died. And according to the Samaritans, someone takes their own life with alarming regularity on the railways. Instead of blithely commenting on their selfishness, or, as in one particularly grim case, offer to “get a firing squad to save them the bother”, perhaps you non-sympathisers could stop and think of the human element. Firstly of the train staff and emergency services who had to bear witness to such a horrific scene and secondly to somebody who felt so incredibly unwell/desperate/crazed that they felt there was no way out. If you’re lucky enough to have never suffered from the kind of mental torture that leaves you feeling like this, bravo. But don’t expect the great majority of us to applaud your ill-informed opinions on suicide.
Posted by my6percent at 12:19 4 comments

The Power of Information 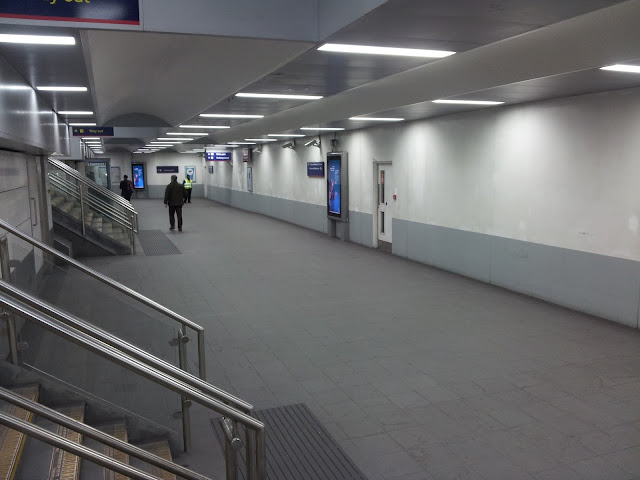 A guest blog by @BigDoodyBoy

So, Monday 29th of October 2012 was another of those days Southwest Trains would like to forget. Overrunning engineering work and 2 passengers taken ill had a devastating effect on morning services with some lines not restored to full operation until after 16:00.

If there was any doubt as to the effect, you only need to look at the photograph I took at 08:45 of the lower concourse at Waterloo. It clearly shows that no-one was arriving.

Commuters were taking to twitter in droves complaining about a lack of trains and a lack of information. Three incidents bringing a whole network to an almost complete
standstill certainly warrants complaint although given how often it happens there must be some intrinsic logistical nightmare that just cannot be overcome. What intrigues me, though, were the complaints about lack of information. For the first time ever, I did not experience this problem and what a difference it made.

We have all heard about information being power and we all believe that having better information would allow us to better manage our own travel options in times of adversity.
And so, we've all complained vociferously about its complete absence when Southwest Trains services go into meltdown. But would having better information really affect your decisions and effect a better outcome? From Monday's experience, I would say "yes". In fact, it would have to be a resounding "YES!".

By 07:00 text alerts and twitter had informed me of problems on my line. Information was available on the t'interweb about the cause, status and the actions being taken. National Rail Enquiries live boards showed services running late, those delayed and those cancelled. I could also get arrivals information that corroborated the anticipated delays and monitoring this over breakfast showed that nothing was getting worse. All I had to do was choose one of three possible services which, given the information available, looked like the best one to get me past the problem area with the least disruption. The outcome? I took a diverted service and arrived at Waterloo only 5 minutes late but almost 15 minutes sooner than Southwest Trains anticipated. The fact that all of the information was correct, consistent and not subject to change at a moment's notice was a both a welcome surprise
and a key point in achieving the result.

But what of others who just turned up? Well, on the train, at every stop, the guard announced that the service was diverted and gave details of the new stopping points. No- one could complain of not knowing where they were going nor be under any illusion as to how long things would take.

This may have been the perfect storm of information availability, accessibility and reliability but it illustrates just how powerful accurate and timely information can be.

So, Southwest Trains, next time you fail to run a decent service, at least provide actionable information to all affected people. You never know, they might actually start thanking you for it! 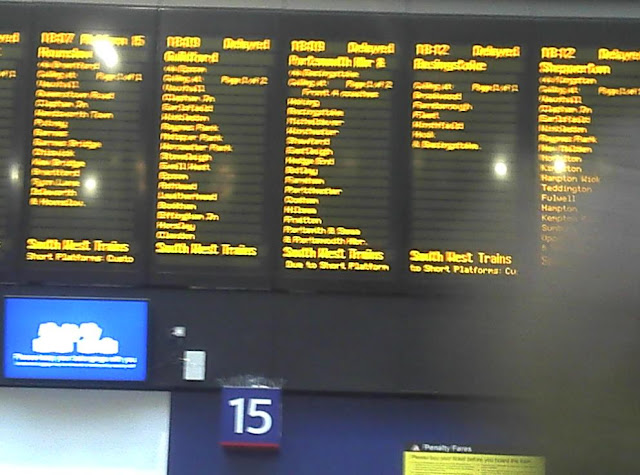 Train fares are all over the news at the moment: BBC are challenging it, Channel 4 seem opposed to it, Channel 5, well they've got some bird who works for the Daily Mail featuring, so that's the big news for them.

Everyone seems to be angry. Bob Crowe is angry with the Train Operating Companies for having ga zillions of profit. The average Joe (me) seem to be torn between raging against the same machine and raging against the Government. The Conscientious objectors point out that we should all rage against the companies that lease the train carriages.

"Who is to blame?", others cry. As Mavis from Corrie used to say: 'I don't reeeally knoooow'. Obviously. I'm but a mere commuter, with no insider knowledge on governance, train operators and the rest. But the more people they claim are responsible, the more diluted the message. And the less likely any action is to succeed. Same old story, rumbling on ...

All I do know for certain is this:

- I go to a South West Trains vendor, cross their palm with silver and get a ticket to travel.
- From January 1st 2012, I was made to pay 6% more for the pleasure - I started keeping a diary of delays, problems, service etc.
- You can see from this blog what the service is like, but that's anecdotal evidence, so who will listen to that?
- So here is a fact. A real fact, not manipulated for any gain or a figure massaged to make the service look either better or worse.
- From 1st January - 1st August 2012. 20% of all my journeys on South West Trains have been delayed (5 mins or more) or cancelled.
- From 1st January - 1st August 2012 I have recieved £0 of compensation

Whoever is 'to blame', I pay my money in good faith to South West Trains. As I am being forced ('forced' because they have a monopoly and I have no other viable way of getting to London) to pay 6% more again from January 1st 2013, is it too much to expect that service should improve and compensation should be clearer and fairer?

Apparently so.
Posted by my6percent at 11:45 1 comments 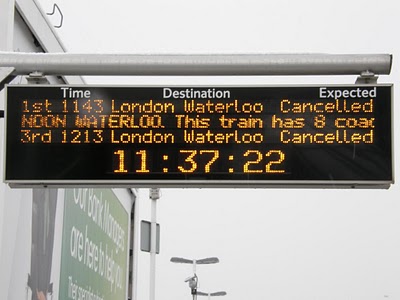 No. 20% of my journeys on South West Trains since 1st January 2012, have been delayed (5mins+) or cancelled.
And so we will have this infinitum for ever and ever. In today's Top news story, Rail fares are to increase by another 6% next January.

Is there really nothing that can be done? Is this it? Surely someone out there has a great idea for some form of protest that doesn't impinge or break laws, but does give decent coverage to help the cause?
Help required. Apply within. 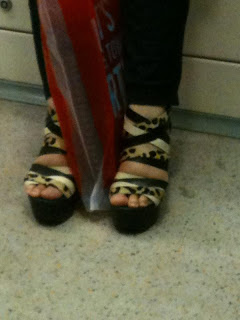 Having witnessed one of the greatest sporting weekends in living history for Britain, it would seem churlish to moan about trains. So I won't.

In fact South West Trains have been remarkably quiet on my route. Plus obviously, we have the lollies. Well, we don't, but the #lollywatch is on and that's a rather splendid touch by South West Trains at London Waterloo. They're strawberry splits, in case you were wondering.

But even more anti-moany this week has been the real success of #Fridayshoes (if you don't know what I'm on about, see previous blog). Not only did we commuters manage to raise £260 out of nowhere for a small and very grateful charity (The Tree of Hope), but even my nemesis, the former root of all Signal failures, geese on the line and weather issues, the MD of South West Trains, agreed to match what we'd made.

I'm sure some could question the gesture, but in the spirit of the Olympics, I am not one of them. I couldn't care less about an ice lolly, but offering cash to help a great cause will stick with me; won't stop me continuing crusade for fairer compo, better service etc.

But it will stay with me. Thank you South West Trains, I'm very grateful.

Thank you to so many of you for continuing to send me your pictures for the South West Trains Montage of Misery. As I always say, this isn't just a place for me to moan, I would rather it was a collective way for us all to document just how rubbish South West Trains are.

If this is your first viewing, it is a Montage of all that is crepe about South West Trains. If you're wondering why I keep using the term 'South West Trains', it is an attempt to get Google to notice me more. Hey, google, over here, cooee!

Back to subject, this week's South West Trains Montage of Misery documents:

- A tongue in cheek protest by cycling commuters. (Last Monday, South West Trains went from saying no non-folding bikes AT ALL would be allowed to travel during the Olympics, to completely changing their mind by Friday. Most amusing). Would a kids bike be allowed to travel?
- The state of certain station platforms. More Chessington World of Tip Juice, then adventures
- Overcrowding, or what we now like to call 'normality' on South West Trains
- Overrunning engineering works. Which now happen so regularly they should just be called 'daily engineering works'.
- People in Ashford, Surrey wanted to take the train and go and see the Olympic Torch. South West Trains didn't duly oblige.
- The continuing Curious Incident of the South West Trains cars in Weybridge car park (has been going on since March, see original blog post here for more info)

Any new ones to add for the next time, please either email me my6percent@gmail.com or tweet me @my6percent 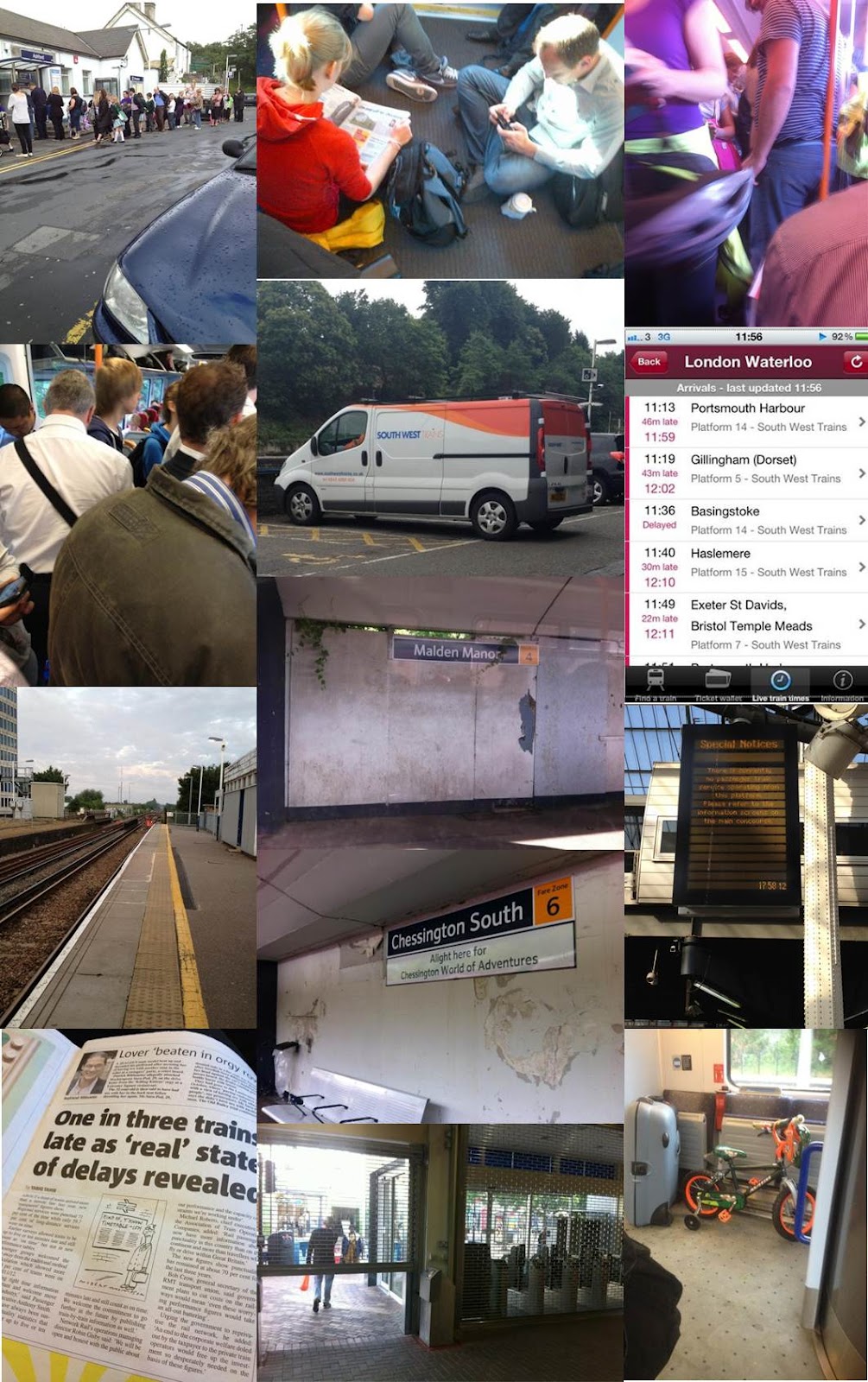 Wow. Even the Montage of Misery appears to be attracting some love from you. Thank you for continuing to send these through. There are some absolute crackers. So many, in fact that I've had to forego the usual 'once a fortnight' rule for new Montages and put up a new one only 4 days after the last.

If this is the first time you've looked at this, it's a montage of all that is shockingly awful about South West Trains. You go on them though, so you probably know this already. If you have any you'd like to add to the next round (which by this rate will come tomorrow!), please do send them to me: @my6percent or email me at my6percent@gmail.com